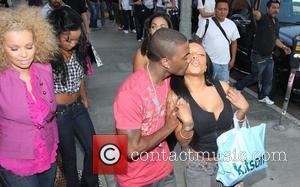 Picture: Ray J films a scene for his as yet untitled reality show, shopping at Kitson and Madison before dining at Cuvee with his model...

A spokesperson for Ray J's new TV dating show has dismissed allegations the R&B singer impregnated a contestant during filming, insisting there is "no truth" to the claims.
The Sexy Can I star - who has been romantically linked to Whitney Houston - has his own VH1 show, For The Love of Ray J, in which he searches for his perfect woman.
But the reality programme, which launched in the U.S. on 2 February (09), has already been struck by scandal, with former contestant Monica 'Danger' Leon alleging she is more than three months pregnant with the singer's child after falling for Ray J's charms.
According to the National Enquirer, Leon bedded Brandy's little brother in November (08) - but has found herself with child after their condom broke and her contraception pill failed.
She tells the tabloid, "I was locked in a mansion with him and 13 girls from October until the end of December. Toward the end of the first week of filming, we made love for the first time - and we slept together every night after that."
Leon - who is now engaged to marry rapper/actor Nick Cannon's brother Gabriel - allegedly told Ray J of her baby news, and the star is reportedly keen to get involved, but she is keeping him at bay because of his straying affections.
She adds, "I saw him playing around with other girls - making out with them and smacking their butts, and it made me sick to think he could be giving me their germs when he was kissing me."
However, a representative for the show has brushed off Leon's claims, saying: "We've been told that the story is not true."