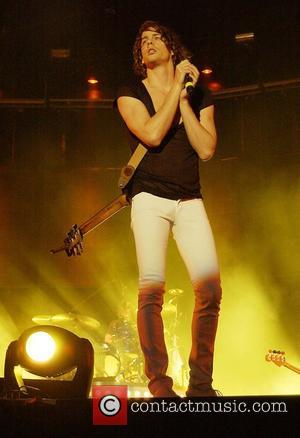 Picture: Johnny Borrel of Razorlight performing at Meadowbank Stadium as part of the T on the Fringe Festival Edinburgh, Scotland - 26.08.07

Razorlight frontman JOHNNY BORRELL was delighted when the lyrics of the band's hit single AMERICA took on a very timely meaning. Razorlight scored their first UK chart number one earlier this year (OCT06), and Borrell admits he was moved when he heard the British public singing his song at a difficult time in American politics. He says, "The week the single came out, the US essentially legalised torture with the detainee bill and there were three in-school shootings. "To have my entire country singing, 'There's trouble in America, there's panic in America', is something that makes me quite proud."

Andy Burrows Was Nervous About Collaboration With Pal Tom Smith

Razorlight Singer 'Not Too Serious'