Reese Witherspoon Felt "Overwhelmed" As She Was Honoured With The American Cinematheque Award In Front Of An Audience Of Hollywood Friends. 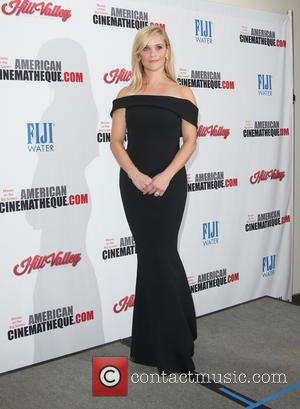 The Wild actress was handed the accolade on Friday (30Oct15) at the Hyatt Regency Century Plaza in Los Angeles by last year's (14) recipient, Matthew Mcconaughey, who called the star "passionate".

Reese's actress friends, including Jennifer Garner, Jennifer Aniston, Kate Hudson and Laura Dern, all took to the stage to give emphatic speeches about the Oscar-winner, but it was Matthew's words that meant the most to the Legally Blonde star.

"The roles you were the most passionate about are the ones that resonate the most today. When you get restless, you create a way. You make it happen," he declared.

"I really thought if I worked hard and did my very, very best, one day I could get Matthew MCConaughey to come on a big public stage and say really nice things about me," she joked. "I actually think that's pretty much every Southern woman's dream... This whole experience is just overwhelming and unbelievable because I'm literally just a girl from Nashville who had a big dream."

Her close friend Kate Hudson called Reese a "modern day feminist," and added of the actress, "I think we have a habit of putting many labels on strong women. Reese is not bossy. She is determined. She is the kind of woman who can inspire a movement. She is a true modern day feminist."