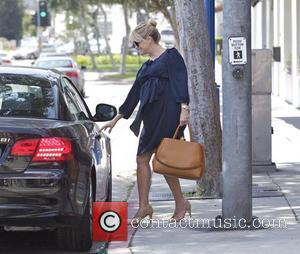 Picture: Reese Witherspoon showing off her baby bump as she leaves Hugo's Restaurant after having lunch with a friend Los Angeles, California - 03.08.12

The 36-year-old's third child is guaranteed a shot at acting with a name like that. Witherspoon already has two little ones from her previous marriage with Ryan Phillippe; Ava, 12, and Deacon, 8. Linda Rosenkrantz, co-founder of Nameberry.com, has some explanations behind naming techniques employed by parents. "It's a trend that had its roots starting in the late 1980s," she said," with several celebs picking names from the American West, like Austin, Dallas and Dakota, including Melanie Griffith and Don Johnson, whose now grown daughter Dakota is the star of a new sitcom. But lately the trend seems to be heating up and much more widespread." Celebrities seem to be obsessed with choosing never-heard-before names for their offspring, and are looking far and wide for names that fit the bill: "The current trend seems to be really exotic-sounding spots, like Morocco, Egypt and Asia, and states rather than countries or cities -- Alabama, Arizona, Indiana and yes, Tennessee."

Laura Jeanne Reese Witherspoon made her name in 2001, with her breakout role as Elle Woods in the box office hit Legally Blonde, after bagging a Golden Globe nomination for the critically acclaimed Election. She also garnered critical praise for her performance in Walk The Line alongside Joaquin Phoenix.

Reese Witherspoon has never been happier