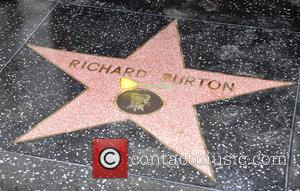 Picture: Star - The late Richard Burton is honoured with a Hollywood Star on the Hollywood Walk of Fame - Los Angeles, California, United States -...

Richard Burton - who died in 1984, aged 58 and starred alongside Elizabeth Taylor in 11 films – has been received his very own star on The Hollywood Walk of Fame, The BBC Reports.

Speaking at the unveiling, Welsh actor Michael Sheen, who attended the ceremony with the Hollywood pair’s adopted daughter, Maria, recalled how he felt when they visited his hometown. "The same beach that I built my boyhood sand castles and learned to flailingly swim, it was that same beach, that one legendary day, Richard Burton and Elizabeth Taylor descended from the heavens, like gods from Olympus, in a helicopter ... and landed on those sands," Sheen said. "They stepped out swathed in luxurious fur coats - it was the '70s - and walked among us for too short a time." The unveiling was pertinently held on the the 50th anniversary of their film, Cleopatra. Speaking after the unveiling, Ms Burton said: "I am very proud and very touched by this. I look at the plaque and it brings tears to my eyes."

They went on to become one of the world's most celebrated couples, starring together in nine further films, including The Taming Of The Shrew and Who's Afraid Of Virginia Woolf? Their first ten-year marriage ended in divorce in 1974, but they tied the knot once more the following year in Botswana but it lasted only until the following summer. More like a cinematic poem or art installation than a movie, this swirly collection of...