Peppa Pig and her friends and family get up to more hijinks than ever before in this new set of adventures - especially when her favourite Golden Boots magically disappear without a trace. Everyone sets out on a mass hunt to find where the missing boots have got to, but they just don't seem to be anywhere. Of course, the team still have plenty of fun - pranking one another and enjoying their regular playtimes in enormous muddy puddles - but just how is Peppa going to compete in the Puddle Jump Competition wthout her special shoes? Peppa consorts with a variety of animal friends from Suzy Sheep and Rebecca Rabbit to Zoe Zebra and Emily Elephant.

Children's animated series 'Peppa Pig' - created by BAFTA nominated Neville Astley and Mark Baker - prepares to hit the big screen after more than ten years of popularity on the small screen. Included in the hour long adventures of Peppa is new episode special 'The Golden Boots' as well as five other mini episodes. Peppa will also be joined by 'Milkshake!' presenters Jen, Derek and Kemi for yet more fun. The 'Peppa Pig' movie is scheduled to hit cinemas in the UK on February 14th 2015. 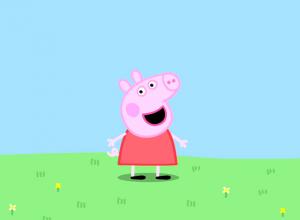 Peppa Pig and her friends and family get up to more hijinks than ever before...