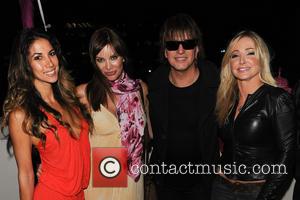 Rocker Richie Sambora appears to have shed some light on the real reason behind his decision to bow out of Bon Jovi's world tour, suggesting a fall out between himself and frontman JON Bon Jovi is to blame.

The guitarist has not performed with the Livin' On A Prayer hitmakers since April (13), when he pulled out of their live gigs due to a "personal matter", and he has since offered up a little more information about the rift which prompted him to take a break from the group.

Speaking to TheSun.co.uk, Sambora reveals he will not be reuniting with his bandmates for their big gig in Hyde Park, London on 12 July (13).

He says, "I am not going to be on stage at Hyde Park sadly. It's just not happening right now. I truly want to be there and I feel very sad for the fans that I won't be performing. I love the fans, I love the band.

"Jon and I have been tight for like 30 years, so all of this is very sad and it affects so many people around us."

However, Sambora is keeping his fingers crossed for a reconciliation in the coming weeks so he can get back to work.

Describing the feud as "a family drama", he adds, "It will be resolved... Let's see what happens at the end of summer. September's looking good. So, maybe September."