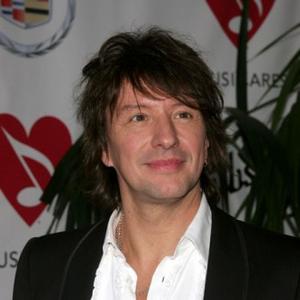 The Bon Jovi guitarist has created the range with designer and musician Nikki Lund and says the name for the collection came to him after he penned a tune with the band's frontman Jon Bon Jovi.

Speaking about how the idea started, Richie said: "Nikki's talent is never ending - she is a genius. Jon and I had this idea for a song, 'White Trash Beautiful', and I was walking around the house one day and said this song sounds like a clothing line.

"Nikki had an amazing line of clothes called Eccentric Symphony and distributed her music as the hangtag. I was a fan. I called her up and it all started from there."

Nikki is also a huge fan of Richie adding: "I have always admired Richie's unique personal style in music and fashion. He is a brilliant artist and trendsetter with over 30 years in the business .it is so inspiring working with him."

The line - which launches in the UK on June 23 with an exclusive party at the Indig02 at London's O2 Arena - includes distressed leather, metallic capes and evening dresses.

Since being launched in the US in March, the collection has already gained a host of celebrity followers such as Miley Cyrus, Carrie Underwood and Bon Jovi.