Rick Ross is an American Rapper born in Clarksdale, Mississippi, and raised in Carol City, Florida. Best known for his singles Maybach Music and Hustlin',  Ross also founded the record label Maybach Music Group in 2009 through which he released a series of albums.

Career: Ross made his debut under the pseudonym Teflon Da Don through Suave House Records, and later changed his name to Rick Ross in the mid-2000s. Ross eventually signed to Slip-n-Slide Records, and released his debut album Port of Miami in 2006.  The record reached the top spot of the U.S. Billboard 200 Album chart in the first week, with sales at 187,000 units.

Two years later Ross' next album hit the top end of the Billboard 200 too. Entitled Trilla, the record featured a number of successful artists including R.Kelly, T-Pain and Nelly. One of his tracks provoked particular interest - 'Valley of Death', a song where Ross claims that he had lived on the streets whilst working as a prison guard, consequently raising questions on why he had originally lied about this. Rick Ross' next three albums were equally successful. Teflon Don launched in July 2010 reached number two on the Billboard 200 and God Forgives, I Don't - released July 2012 - charted at number eight on the UK Albums Chart. Mastermind, released in March 2014, debuted at number one on the Billboard 200. Ross' latest album Hood Billionaire came out in November 2014.

Regarding other achievements, in 2012 MTV named Ross as the Hottest MC in the Game and he  was  nominated by The Source as its 'Man of the Year'.

Personal life: After graduating from High School, Ross attended Albany State University on a football scholarship, and later went on to work as a correctional officer from 1995 to 1997.

Rick Ross has also been involved in a number of legal issues. 2008 saw Ross arrested on both gun and marijuana charges. In 2010 Ross was sued twice: firstly from former drug Kingpin "freeway" Rick Ross who filed a copyright infringement lawsuit for using his name, and secondly from rapper Teflon Don who filed a trademark infringement lawsuit for using his name as an album title. June 2015 saw Ross and his bodyguard arrested for kidnapping and assault charges.  In April 2013 Ross was dropped as a spokesman for Reebok after a petition holding 72,000 signatures was presented to the company on account of one of his songs condoning date rape.

In 2009 a feud was sparked at the BET awards following 50 Cent apparently looking the wrong way at Ross. The rivalry lasted five years and included a number of songs released by both artists for the purpose of insulting each other publically.

Ross and his girlfriend survived a drive-by shooting on January 27th 2013 whilst celebrating his 37th birthday. The two were forced to crash their car into an apartment to avoid the gunfire.

Rap impresario Rick Ross has stirred up a hornets’ nest of controversy by remarking that the reason he doesn’t sign female rappers to his label is that he would “end up f***ing them”.

The 41 year old rapper, who heads up his own Maybach Music Group, appeared this week on ‘The Breakfast Club’, the morning show of New York radio station Power 105.1FM. Host Angela Yee asked Ross about his label’s record of supporting female artists, he admitted that he wouldn’t be able to treat them as professionals.

“You know, I never did it because I always thought, like, I would end up fucking a female rapper and fucking the business up,” Ross said. “I’m so focused on my business. I gotta be honest with you. You know, she’s looking good. I’m spending so much money on her photo shoots. I gotta f*** her a couple times.”

Continue reading: Rick Ross Claims He Wouldn't Sign A Female Rapper Because He Would "End Up F***ing" Them 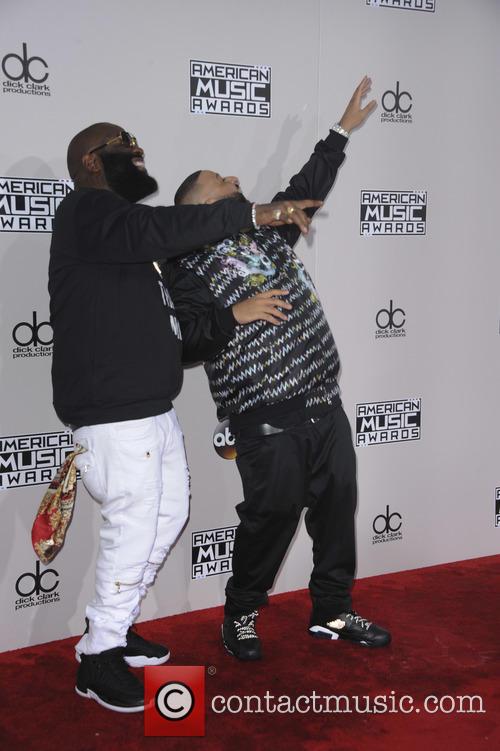 By Stephanie Chase in Music / Festivals on 17 October 2015

The rapper filed bankruptcy proceedings in July, but he looks to have plenty of cash lying around the house.

50 Cent has taken to Instagram to hit back at those who have been making fun of his recent money problems. The rapper has recently been the butt of many a joke by fellow artist Rick Ross since filling bankruptcy proceedings in July, however three months on 50 doesn't seem too strapped for cash anymore.

Continue reading: 50 Cent Shows Off His Cash On Instagram In Response To Rick Ross' Bankruptcy Jibes This sum will be added to the $5 million in damages that Fiddy has already been ordered to pay to Lastonia Leviston, whose sex tape he leaked online seven years ago.

Things don’t look like improving for 50 Cent any time soon. Just a couple of weeks after he filed for Chapter 11 bankruptcy, he’s now been ordered to pay an extra $2 million in punitive damages to the woman whose sex tape he posted online.

The Associated Press reports that the rapper, real name Curtis Jackson III, will now have to pay a total of $7 million to Lastonia Leviston, the Floridian woman and ex-girlfriend of his rival Rick Ross, after he was found guilty of infringing her right to privacy by posting a sex tape of her without her consent in 2008.

James Renard, Jackson’s attorney, told People magazine in a statement on Friday (July 24th): “Although we appreciate the jury's service, we are disappointed in the result.”

The court case stems from the sex tape he leaked of Lastonia Leviston, a former girlfriend of his rap rival Rick Ross, in 2009.

50 Cent is no longer just the performance name of rapper Curtis Jackson – it may also be his net worth, after reports emerged on Monday that the star has filed for bankruptcy. It comes just three days after a court ordered ‘Fiddy’ to pay $5 million to woman whose sex tape he shared online without her permission.

The Wall Street Journal first reported that Jackson had filed for chapter 11 bankruptcy protection on Monday (July 13th), the same day that he was due to disclose a net worth statement to the Manhattan court that had handed down the judgment in order to calculate punitive damages in addition to the $5 million award given for the victim’s distress. However, the initial bankruptcy filing claims that Jackson has in the range of $10-$50 million both in assets and liabilities. 50 Cent has reportedly filed for bankruptcy on Monday (July 13)

By Elinor Cosgrave in Lifestyle / Showbiz on 12 July 2015

50 Cent will be shelling out a pretty penny to a woman whose sex tape he posted online back in 2009.

50 Cent, A.K.A. Curtis Jackson, has reportedly been ordered to pay $5 million to a woman whose sex tape he posted online. A New York jury made their decision on Friday (10th July) and they are expected to continue deliberating on possible further punitive damages over the next week.

50 Cent was ordered to pay $5 million in damages to a woman whose sex tape he shared online. Rapper Rick Ross Arrested On Possession Of Marijuana In Georgia

By Elinor Cosgrave in Lifestyle / Showbiz on 11 June 2015

Rick Ross, the rapper best known for his 2008 hit ‘Hustlin’’, was arrested on Wednesday (10th June) in Georgia.

Rick Ross has been arrested and charged with possession of marijuana. The 39-year-old rapper was reportedly arrested on Wednesday (10th June) after a police officer pulled him over in Fayette Country, Georgia and discovered marijuana in his car. Rick Ross was arrested in Georgia on Wednesday.

The chart-topping rap star was reportedly busted in Fayette County in Georgia on Wednesday.

American rapper Rick Ross has reportedly been arrested in Georgia for possession of marijuana in his car, which was initially stopped because its tinted windows were in violation of road regulations.

Fayette County Sherriff’s Office spokesman J. Allen Stevens said that Ross, whose real name is William Leonard Roberts, had been processed and placed in the county jail on Wednesday afternoon (June 10th). Atlanta news outlet WSB first reported the arrest, which has since been confirmed by Billboard. The 38 year-old rap star was arrested after failing to show up to a court date for possessing marijuana from 2013.

Rick Ross, whose real name is William L. Roberts, has ran into some legal trouble...again.

The rap star was arrested on Friday night in Greensborough, North Carolina, right after his performance at the 2014 SuperJam at the Greensboro Coliseum.

Ross was apprehended due to 1 year-old warrant from another North Carolina arrest involving possession of marijuana. 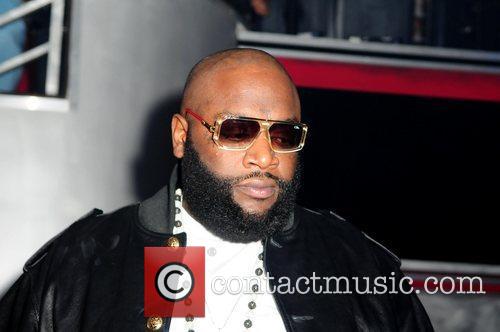 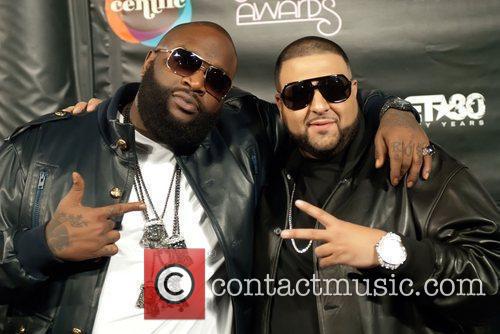 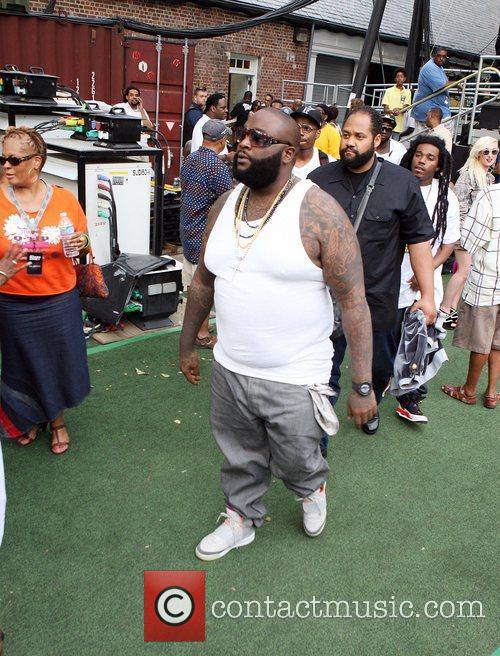