Rapper Rick Ross Has Been Dealt A Blow In His Court Battle With LMFAO After A Florida Judge Dismissed A Big Part Of His Copyright Infringement Lawsuit Over The Dance Duo's 2010 Hit Party Rock Anthem. 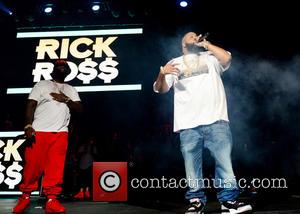 The hip-hop star sued LMFAO in early 2014, claiming they illegally derived the song's phrase "Everyday I'm shufflin'" from the lyrics of his 2006 debut single, which featured the words, "Everyday I'm hustlin'", and "capitalised on the fame and success" of Ross' tune by performing the line in a similar fashion.

He also took issue with bandmates Redfoo and Sky Blu's use of the phrase on their concert merchandise, but now that portion of his argument has been thrown out of court.

In a summary judgement regarding the use of the phrase "Everyday I'm shufflin'" for clothing, U.S. District Judge Kathleen Williams writes, "The question presented, however, is not whether the the Iyrics of Hustlin', as arranged in their entirety, are subject to copyright protection. The question is whether the use of a three word phrase appearing in the musical composition, divorced from the accompanying music, modified, and subsequently printed on merchandise, constitutes an infringement of the musical composition Hustlin'. The answer, quite simply, is that it does not."

As a result, the lawsuit will only concern the copyright infringement claim in regards to the two songs when it heads to trial in the near future, according to The Hollywood Reporter.

Bosses at Kia Motors, who used LMFAO's track in a recent advertisement, are also listed as defendants alongside Redfoo and Sky Blu.

Ross is seeking an injunction and maximum statutory damages.