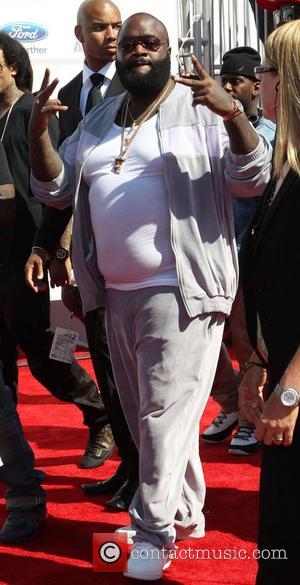 Rappers Rick Ross, Waka Flocka Flame and Meek Mill have been sued by a club promoter over allegations they breached their contracts in relation to a gig in North Carolina in March (12).

The legal documents suggest Ross was paid $90,000 (£56,200) to headline the set, but walked off stage after just 15 minutes. The rappers are also accused of failing to fully promote their appearances before the gig.

The complaint reads, "In exchange for these promises, Sgmu agreed to pay - and did pay - the sum of $90,000 to Rick Ross, $37,950 to Wacka Flocka, and $26,500 to Meek Mill. Finally, although Waka Flocka and Meek Mill performed for most of the 60 minutes they agreed to perform, Rick Ross - the headline performer - abruptly walked off the stage after performing for only about 15 minutes.

"Those people who spent their hard-earned money to attend the concert were left with a lasting negative impression of the quality of events promoted by Smgu as a result of the defendants' conduct."