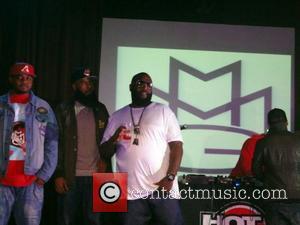 Rick Ross, Common and Lupe Fiasco will team up to pay tribute to hip-hop hero Grandmaster Flash at the Grammy Nominations Concert Live in Los Angeles on Wednesday (30Nov11).
The trio will perform rap anthem The Message with Flash and longtime collaborator Melle Mel to mark the recording's recent addition to the 2012 Grammy Hall of Fame.
Another rap pioneer, LL Cool J, will host the event, which will also feature performances by Lady Gaga, Rihanna, Sugarland and Usher.