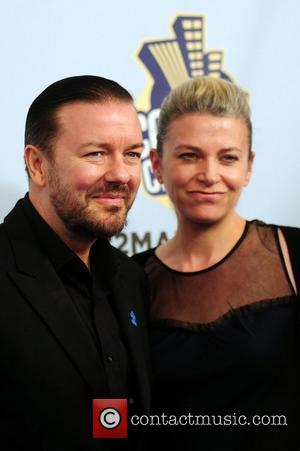 Ricky Gervais, the Golden Globe winning comedian and actor, has revealed the secrets behind his recent weight loss which has seen him shed around 20 pounds, reports People Magazine. The 49-year-old star of 'The Office' said that he and long-term girlfriend JANE FALLON began jogging near their home in Hampstead Heath, London.
Gervais, who is currently appearing in his reality travel show 'An Idiot Abroad' with Stephen Merchant and Karl Pilkington, revealed that he didn't make any drastic changes in order to become slimmer, saying, "It wasn't so much about the weight. It was more that I was a fat, lazy, out of shape slob, to be honest. I didn't eat differently. I probably just stopped having that second meal at 11:30 at night". However, girlfriend Fallon admitted that her cooking probably has something to do with Gervais' trimmer figure, she said, "I was trying to lose weight as well, so I was cooking healthier versions of what we were eating. He didn't realise that I was probably feeding him less calories at the same time he was running".
Gervais is currently working on 'Flanimals', an animated film based on the series of books of which he also wrote. The movie is currently scheduled for release in 2011. He is also set to appear in the new series of 'Curb Your Enthusiasm', starring Larry David.