Review of Unapologetic Album by Rihanna

Seven albums in for Rihanna and as each one passes you can't help but feel that you're witnessing another step in the Barbados-born singer's slow morph from human into marketing algorithm. Pop sells product, it exists in the eyes of its backers to provide instant gratification to the listener, make a brand name out of its vessel and a load of money for the lot of them. We get that; but whereas peers like Lady Gaga manage to work within the empire that they've created with the sense of someone who can still, on some level, reach inside and find the artist within herself, Rihanna is increasingly ignoring the music entirely. Unapologetic is slick, shimmering in production and utterly devoid in personality, an album that feels it's been written by programming rather than hand. 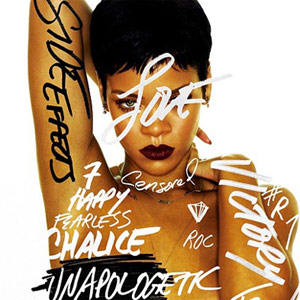 This sterility is odd because Rihanna the public figure is one for whom nothing is too controversial or too shocking to be used for marketing purposes - the proof of that lies in her abusive former boyfriend Chris Brown popping up on the tenth track. That track in itself requires another review entirely; the issue of Brown and Rihanna apparently putting the past behind them and almost goading the public into a response over it making 'Nobody's Business' a particular hard listen to gestate. That's partly because if it had anyone else collaborating on it, its Michael Jackson-esque piano stomp would actually be one of the highlights of the album. As it is, it creates an uneasy feeling in the pit of the stomach that tends to always come about when you get the sense that something isn't quite right.

Brown popping up aside though, Unapologetic is completely at odds with a star whose been snapped in public taking drugs, going into sex shops and running around topless. In fact, it's pretty bland. We shouldn't be so surprised really; for all her shenanigans, her recent 777 tour was notable for, among other things, Rihanna asking her fans to cheer her sponsors ACT, River Island and Budweiser whilst on stage. This suggests that the 23 year-old's backers have given up even suggesting that her career is anything other than a cash cow, the music not even really a necessity anymore, and it really shows on the LP.

Opener 'Phresh Out The Runway' paves the way for an album that sees Rihanna vocally do very little; most of the notable performances are delivered by a range of collaborators including Eminem ('Numb') Future ('Loveeeeeee Song') and Mikky Echo ('Stay'). These aren't necessarily high points of the album but at least they give us something to talk about; the bite of Eminem's voice is much needed in an album that otherwise feels like it's moving forward in one unnervingly calculated movement. Likewise, Echo's contribution to the slow ballad 'Stay' is welcome because it, for once, provides the sense that we're listening to a human creation and not some kind of faceless pop droid.

It doesn't help either that much of the arrangements made by her songwriters pummel into you like some crashingly dull wall of sound, compressed and turned up to the hilt, but possessing sonic elements that resemble the texture of concrete. The ballads work best only because the auto tune, the synths and the tiring bass thuds are put away and Rihanna is actually allowed to breathe.

Much is made of RiRi's sex appeal - rightly or wrongly - in the press, but any sort of titillation or charisma is hard to find here, instead we get a reinforcement of what this is all about; "money on my mind" she sings repeatedly in the dour synth-pop of 'Pour It Up'. Talk of strip clubs and late night bars out is delivered in a way to devoid any such evening of any sense of risqué. On 'Right Now', featuring the equally uninspiring David Guetta, she offers up meaningless platitudes of "being young right now", before allowing the producer decidedlyordinaire to stick his trashy house beats on for a couple of minutes. As phone-ins go, it's right up there.

The album gets better towards the end, when its army of relentless passionless beats finally die away and allow 'Get It Over With' and 'No Love Allowed' a little bit of space to explore and move around. Rihanna actually approaches someone who seems to possess a heart in the former, reflective in tone and consolatory in nature; the latter meanwhile sounds almost 'fun' in its reggae, off-beat and kaleidoscopic sounds. Fun: it's something that's lacking a lot in this album, Unapologetic rattling on machine-like but with very little given away to the spirit of enjoyment. That's been Rihanna's life to some extent, a relentless march for profile and fame, with even any of her eccentricities seeming forced and contrived. She doesn't have to feel apologetic for anything, but what's more concerning is that Rihanna doesn't seem to feel anything anymore, something all too apparent on this turgid LP.