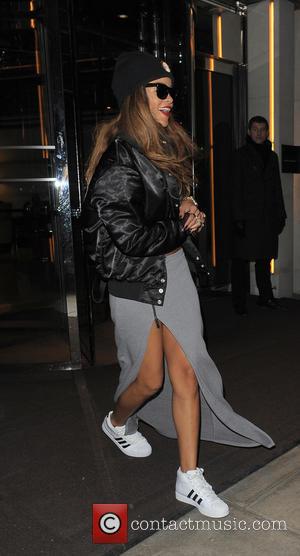 The general consensus over Rihanna's reunion with the boyfriend that beat her the night before the 2009 Grammys, Chris Brown, has been to leave her be. Yes, most people think it's a silly decision, but each to their own. However, one fan clearly thought it was a little worse than a 'silly decision' as one 'fan' ended up throwing a bottle at the singer, reports TMZ.

Rihanna has been in London for the esteemed fashion week in which she's debuting a range of clothing for highstreet retailer River Island. While out with pals Melissa Ford and model Cara Delevingne a 'crazed fan' hurled abuse at Rihanna both verbally and physically. Allegedly, she screamed something about Chris Brown before sending a Lucozade bottle violently Rihanna's way. It didn't hit her but amid the commotion as photos show she ended up with a bleeding knee.

There has been no comment on the incident from Rihanna's camp. There is some good news for Rihanna as she won an award for best short form video at last week's Grammy Awards. Furthermore, there have been other reports that Rihanna has been avoiding Brown, apparently they spent Valentine's Day apart as she went to an Usher concert and he stayed home tweeting about his mum.