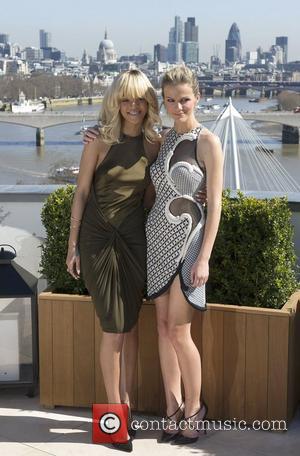 Picture: Rihanna, Brooklyn Decker The London Photocall for 'Battleship' on the roof of the Corinthia Hotel London, England - 28.03.12

Rihanna has shot down speculation she is dating the Two and Half Men actor Ashton Kutcher after being quizzed on the subject at a London press conference for new movie Battleship. The We Found Love singer was spotted leaving Kutcher's Los Angeles pad at 4am earlier this week, but she didn't take kindly to one reporter asking whether he would be visiting her in the UK.

According to MTV News, Rihanna's face "dropped" as she was asked about her private life, firing back "Wow, how disappointing was that question. I'm happy and I'm single, if that's what you're really asking". The statement contradicts the Sun newspaper's report that Rihanna has been dating Ashton for eight weeks and even introduced him to her young brother Rorrey. The actor's ex-wife Demi Moore - who recently completed a stint in rehabilitation - is said to be devastated by the on-going speculation. A source told Closer magazine, "She's really hurt by the rumours and feels humiliated he's being linked to other celebrities just a few weeks after she got out of rehab.She feels it cheapens their marriage even further".

Rihanna's new movie Battleship is based on the classic naval war board game of the same name. The film also stars Alexander Skarsgard, the model Brooklyn Decker and Liam Neeson. It will first hit screens in the UK on April 11, 2012, before opening in the U.S. in May.