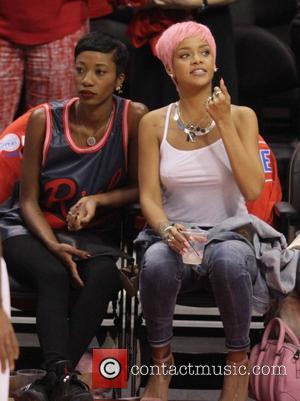 Picture: Rihanna - Rihanna sports a new pink hairstyle as she and a friend cheer on the Los Angeles Clippers NBA basketball game against The Oklahoma...

Rihanna has recruited fellow hitmaker Emeli Sande to create songs for her next album.

The Next To Me singer revealed she is developing new tunes for Rihanna on the red carpet at the Ivor Novello Awards in London on Thursday (22May14).

The project will coincide with Rihanna's latest movie, the animated Home.

Sande said, "I've been writing for Rihanna's new movie, which has been incredible."

Rihanna is reportedly developing a concept album based on the 3D film, which also features the voices of Jennifer Lopez and Steve Martin.