Rihanna And Ashton Kutcher Spending Summer In The UK? 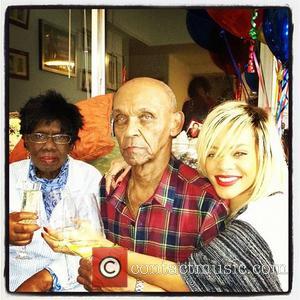 Picture: Rihanna posted pictures of herself on Twitter with her grandparents celebrating her grandfather's birthday with the caption G'z 4 Life

Rihanna has reportedly been trying to persuade her rumored new boyfriend Ashton Kutcher to spend the summer with her in the UK. The Two and a Half Men star may prefer to spend a couple of months with the singer in her native Barbados, but it seems Rihanna has other ideas, reports the UK's Sun newspaper.
The 24-year-old has asked Kutcher to travel with her to Britain, where she's due to perform London shows at Wireless Festival in Hyde Park and at Radio 1's pre-Olympics Hackney weekend event. The request is considered the latest sign that Rihanna is serious about a relationship with Kutcher, who has been single for several months after splitting from ex-wife Demi Moore. The couple have reportedly been dating for eight weeks, with the singer introducing her new man to little brother Rorrey in New York last week. A source said, "Rihanna and Rorrey, who releases music under the name GQ, are close so him meeting Ashton is a big deal.Rihanna clearly thinks things between them are serious".
The 'secret' relationship was essentially uncovered by Tmz.com last week, who snapped Rihanna arriving at the actor's Los Angeles pad at midnight, leaving at around 4am.