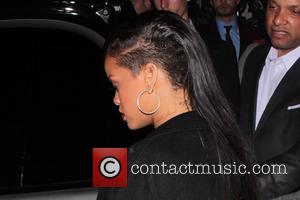 Amid rumors of their rekindled romance, Rihanna and Chris Brown have had their slushy new track 'Nobody's Business' leaked online.

The couple apparently got back together after Rihanna confessed her love for the singer to Oprah Winfrey and Chris Brown left his model girlfriend Karrueche Tran. They had originally split after Brown was arrested and charged for domestic violence in 2009 which left Rihanna with severe bruising to the face. As a result of this controversial reunion, many people have been left unimpressed by the message that the relationship puts across particularly to young girls and victims of domestic abuse. The title of the song is a clear indication of how the couple feel about being judged, as is the upcoming album it is taken from, 'Unapologetic', which is set for release on Monday (November 19th 2012).

Rihanna and Chris Brown have previously worked together on the song 'Birthday Cake' which was released on her last album 'Talk That Talk'. Like 'Nobody's Business', it is a song of romance, however with a few particularly crude differences. As for the couple being back together, Rihanna has denied such allegations, insisting on 'The Ellen Degeneres Show' that she is still single though open to the idea of a relationship.