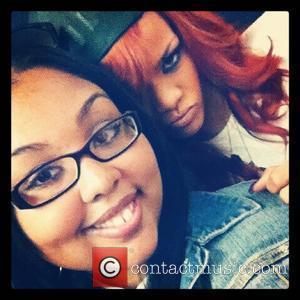 Picture: A fan tweets this pic of herself and Rihanna 22.05.12 Supplied by WENN does not claim any ownership including but not limited to...

Rihanna is baffled by Simon Cowell's decision to fire Cheryl Cole from the American version of The X Factor, insisting the Girls Aloud star was "received so well" by U.S. viewers.
The music mogul axed the British singer during auditions for the first season of the show last year (11) amid speculation she failed to make an impact on audiences and TV executives.
But Rihanna is convinced Cole, who served as a judge on the U.K.'s The X Factor before taking up the U.S. job, was the right woman for the job - and hopes she lands a similar role on the next season of rival show American Idol.
The Umbrella hitmaker tells Britain's Daily Star newspaper, "I can completely see why the producers at American Idol are trying to get Cheryl - she would be amazing. I don't know if Jennifer (Lopez) plans to stay another season or not but Cheryl would be a great replacement for her. The only thing Cheryl needs to consider is that it's so time-consuming.
"She was received so well on the U.S. X Factor and most people couldn't really understand the decision to let her go."
Rihanna isn't Cole's only celebrity supporter - her brief cameo as a talent show judge in new romantic comedy What To Expect When You're Expecting won her fans in co-stars Cameron Diaz and Matthew Morrison.