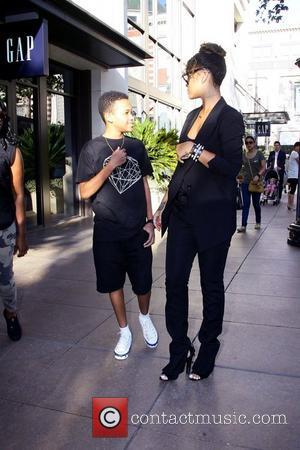 Rihanna, the R&B star who was told to "cover up" by a Christian farmer whilst filming her latest music video, has moved production to Belfast City Centre. On Monday (26th September 2011), Dup Alderman Alan Graham was out in his Bangor field when he reportedly saw the singer topless and requested that filming be stopped.
A reporter for the Belfast Telegraph yesterday asked the singer what she thought of the farmer's decision, to which she replied, "He was great". The singer and her crew complied with the farmers request and moved filming of the music video, for new single 'We Found Love', to Belfast's New Lodge area. According to the Bbc, the singer arrived shortly after noon on Tuesday accompanied by police officers and security guards. Around 1,000 fans of all ages packed into the local square and "mobbed" the singer in between takes. Rihanna, real name Robyn Rihanna Fenty, is set to play three sold out concerts in Belfast's Odyssey Arena this week, before playing Dublin's O2 Arena on Monday (3rd October 2011).
'We Found Love', a collaboration with Scottish Dj Calvin Harris, is the first single to be taken from Rihanna's currently untitled sixth album set for release on 21st November 2011.