Rihanna, Calvin Harris And Deadmau5 Sign Up For Charity

Rihanna, Calvin Harris and Deadmau5 are to headline a charity concert at the House Of Blues in Los Angeles on February 12. 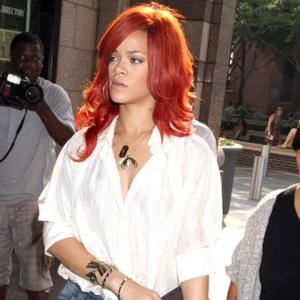 Rihanna, Calvin Harris and Deadmau5 are to headline a charity concert in Los Angeles later this month.

The acts will perform at the House Of Blues in Los Angeles on February 12 - the same night as the Grammys - for the exclusive show, which will benefit the Children's Orthopaedic Center and an artists programme at Children's Hospital Los Angeles.

Tickets for the show - which also features Sebastian Ingrosso of Swedish House Mafia - are $1000 each, but with a number of huge stars in town for the music awards, the show is bound to be a star studded affair and could include a few surprise guests.

The day also promises to be busy for all artists, as 'You Da One' star Rihanna is expected to perform her single 'We Found Love' with Calvin, then later take to the stage with Coldplay at the Grammys for their duet 'Princess of China'.

Coldplay singer Chris Martin has previously admitted he had to "pluck up the courage" to ask the 'Umbrella' star to sing with them.

He said: "We did a show in Las Vegas and I met her and said, 'Do you think there's any chance?' I was very Hugh Grant-like and spluttering about it.

"It took a while to pluck up the courage to ask her. She has such an amazing voice and it's so different to mine."

Meanwhile, Adele has confirmed she will make her return to live performance singing at the Grammy Awards after successful surgery on her vocal cords last year.

She tweeted: "Ima be, Ima be singing at the Grammys. It's been so long I started to forget I was a singer! I can't wait, speak soon xx. (sic)"