Rihanna went on a sightseeing tour of London yesterday morning (27.06.12) after being evacuated from her hotel following a fire. 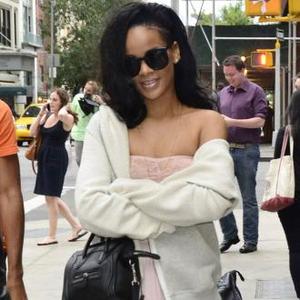 Rihanna went on a sightseeing tour of London yesterday morning (27.06.12).

The 'We Found Love' hitmaker went to see some of London's famous landmarks, including Downing Street - the home of British Prime Minister David Cameron - Big Ben and Buckingham Palace - after she was evacuated from her hotel following a fire.

She left the Corintha Hotel in Whitehall Place when the alarms went off and stood with around 300 guests, but instead of waiting around she decided to take the opportunity to check out The Sights of capital city.

An eyewitness told The Sun newspaper: ''When The Alarm went off she packed her laptop and jewellery and headed outside with other guests.

''But instead of waiting for the all-clear, she got a taxi to take her on a tour of Downing Street, Big Ben, Westminster Abbey and Buckingham Palace.''

After her impromptu tour, the Bajan beauty stopped off at fast food restaurant McDonald's for some breakfast before heading back to the hotel.

The source added: ''She also made time to stop for a McDonald's breakfast from Charing Cross.''