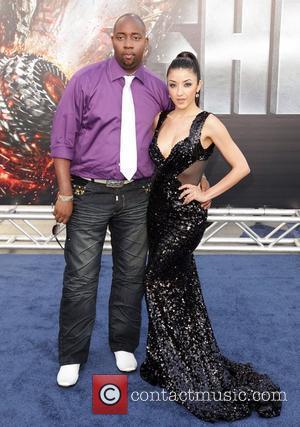 Pop/R&B diva Rihanna was forced to postpone any plans she had made for today as she was too busy recovering from a messy night on the tiles around London. The 'S&M' singer flew into Heathrow yesterday to see the hip-hop superstars Jay Z and Kanye West on their 'Watch The Throne' tour as it stopped by the O2 Arena. What was supposed to be a fleeting visit turned into an overnight stop as she joined them after the show for a 40th birthday celebration for manager Tyran 'Ty Ty' Smith at the Dstrkt nightclub.

The Barbadian singer soon left any inhibitions behind as she partied the night away along with Kim Kardashian, Rita Ora, Gwyneth Paltrow and Chris Martin, as well as The Throne.

She woke up with more than a head-ache this morning though, as her plans were gravely interrupted. She Tweeted "So ummm.... I'm supposed to be on a plane rt now!#r," but had previously Tweeted how much she had enjoyed the night so it is doubtful that she will be too worried about how the day has gone so far.

Rihanna's partying is quickly becoming the stuff of legend, but there are fears she is overdoing it after she was admitted into hospital following a recent night-out in New York.