R&b Star Rihanna Has Sparked Speculation About Her Love Life After She Was Spotted Out With Rising Rapper Travis Scott In New York City For The Third Time This Week (Begs07sep15). 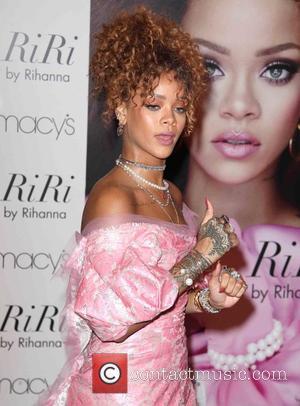 The FourFiveSeconds hitmaker showed her admiration for Scott on Instagram on Monday (07Sep15) when she uploaded a photo of herself in a record store, gleefully clutching a copy of the emcee's debut album, Rodeo.

Rihanna was then spotted in attendance at Scott's concert at Manhattan's Gramercy Theatre on Tuesday (08Sep15), before hitting the town with him to go clubbing.

They were seen dancing intimately at hotspots Up & Down and 1Oak, where they partied with Justin Bieber, The Weeknd and his model girlfriend Bella Hadid.

An eyewitness tells the New York Post, "They (Rihanna and Scott) are definitely together. They were dancing very close and didn't care who could see them."

Rihanna, whose track B**ch Better Have My Money was co-written by Scott, further fuelled the romance rumours by showing up at the rapper's second show at Gramercy Theatre on Wednesday (09Sep15), when they were photographed leaving the venue together after the gig.

The stars have yet to comment on the relationship claims, which emerge after Rihanna was linked to Formula One ace Lewis Hamilton in August (15). The British racing star recently dismissed the reports, insisting they are just old friends.

Rihanna was also said to have struck up a romance with French soccer star Karim Benzema in June (15), while reports suggest friends are trying to persuade her to give her romance with ex-boyfriend Chris Brown another chance.