Rihanna reportedly wants to party with Kate Moss and has invited her to join her entourage at London's Wireless Festival in July. 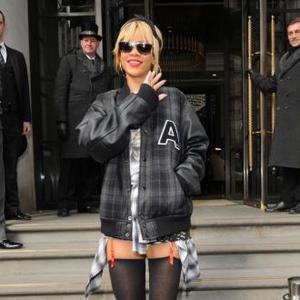 The 23-year-old 'We Found Love' hitmaker is apparently so enamoured with the supermodel that she has invited her to her July performance at London's Wireless Festival.

She wants Kate, 38, to join her entourage at the Hyde Park event so they can hit the town together later that night.

A source told The Sun newspaper: ''She thinks Kate is great fun so has invited her to see her play and party afterwards.''

Meanwhile, it has been claimed that Rihanna ''flips out'' like a child every time she adds a new Tattoo to her collection.

The singer recently unveiled a new cross on her collar bone - her 12th piece of body art - and the responsible New York tattooist, 26-year-old Bang Bang, says she tends to get over excited once the process is complete.

He told US Weekly: ''She loved it. She always flips out [when it's done] and jumps up and down like a 16-year-old girl getting her first car.''

Rihanna also has ''Shhh'' tattooed on her finger, and ''rebelle'' on her neck.