Veteran Rocker Ringo Starr Is Giving Fans The Chance To Own Rare Beatles Memorabilia After Clearing Out His Closets For An Extensive New Auction, Which Is Expected To Raise Between $5 Million (£3.13 Million) And $10 Million (£6.25 Million). 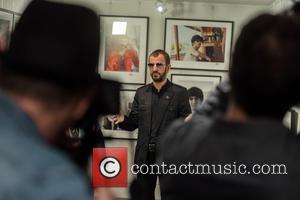 The Fab Four star reveals he and his wife, Barbara Bach, realised it was time to offload the many keepsakes they hadn't seen for decades after discovering just how much they had accumulated over the years as they sorted through items to lend to officials at The Grammy Museum in Los Angeles for an exhibition about the drummer's life and music in 2013.

They subsequently decided to empty their storage facilities around the world and now those souvenirs, including items they had kept at their former homes in England and Monte Carlo, Monaco, are set to make up the more than 800 lots going under the hammer for Julien's Auctions in Beverly Hills, California in December (15).

The 75 year old tells the Associated Press, "We have so much stuff and a lot of it we haven't seen in 20 to 30 years... We thought, 'What are we going to do with all this stuff...?' We're fed up with having the stuff in storage when it could be put to some good use and also give a lot of people joy."

Other items up for auction include an original pressing of The White Album, which Starr "had in a bank vault for the last 35 years", a 2000 Mercedes Coupe car previously owned by late bandmate George Harrison, and a limited edition drum kit inspired by drummer Hal Blaine that Harrison had commissioned for Starr in 1968.

The items will go on display at The Hard Rock Cafe in New York, the Museum of Style Icons in Ireland, and Julien's Auctions house before the sale on 4 and 5 December (15).

It's not the only auction of Beatles goods coming up - the band's signed 1962 contract with manager Brian Epstein is expected to fetch as much as $800,000 (£500,000) when it goes up for auction at Sotheby's Rock & Pop sale in London on 29 September (15). The document was signed in October, 1962, two months after Starr joined the group as former drummer Pete Best's replacement.