Rita Ora was spotted with a mystery man in Barneys department store in New York on Tuesday (07.05.13) wearing the same outfit she wore the night before at the Met Ball. 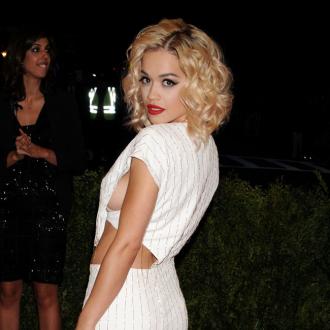 Rita Ora was spotted wearing the same outfit with a mystery man the day after the Met Ball.

The 'Radioactive' singer was seen in New York City department store Barneys on Tuesday afternoon (07.05.13) with a mystery man and was still in the lavish white Thakoon gown she was seen in at the star-studded Costume Institute Gala on Monday (06.05.13).

A source told the New York Post newspaper: ''Rita was at Barneys the day after wearing the same clothes. She was in the elevator, wearing sunglasses, with some guy.''

The 22-year-old beauty is said to have become frustrated after being noticed, with the source adding: ''She was trying to hide and getting annoyed that the elevator doors kept opening.''

As well as her trip to Barneys, the 'R.I.P.' hitmaker also got a new tattoo - a dove on the back of her neck - on Tuesday and shared a picture of her new inking with fans on Twitter, writing: ''My new baby bird thank you @bangbangnyc (sic)''

The pair are thought to have spent the weekend together in Las Vegas, where Calvin was performing at new night club Hakkasan on Saturday night (04.05.13).

A source said: ''She was in the DJ booth during his entire performance and the two were seen getting really cosy and kissing.''