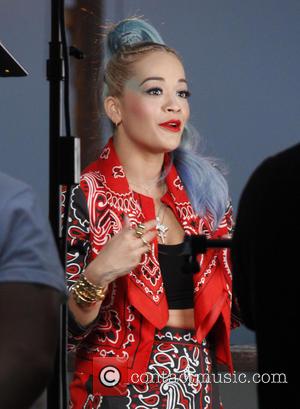 Rita Ora has opened up about her no-show at last weekend's (10Aug14) Teen Choice Awards in Los Angeles, confirming reports suggesting her ex-boyfriend Calvin Harris refused to let her perform the love song they wrote together.

Ora was an anticipated performer at the ceremony, but DJ Harris, who owns the creative rights to I Will Never Let You Down, refused to approve the track at the last minute, and the R.I.P. singer was left with no option but to scrap her set.

Appearing on DJ Ryan Seacrest's radio show in L.A. on Tuesday (12Aug14), she explained, "For anybody who doesn't understand how it works, he wrote and produced the song, so he has to approve anything TV-wise... and he didn't approve the Teen Choice Awards.

"I could have got told a few weeks earlier, you know. That would have been nice. It was a last minute change, but, you know what, it happens and we move on and move forward... It is what it is, man. You write a song with somebody, and I guess there's some stuff that comes with it... Everything happens for a reason, that's how I look at it."

Ora performed an unplugged acoustic set of the song on Seacrest's show and insisted that regardless of her ex's feelings about the tune, she still thinks it's a hit, adding, "It's basically a love song you can dance to. I wrote this with a really special person, and it was the first time I ever kind of opened my doors up for somebody I knew personally. So, this song was written out of love and... it was convenient for the time it was written.

"People move on and move forward, but the song still has the same message... It's still an amazing song. I don't want anybody to have, like, a dark cloud over this song."