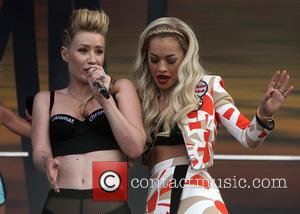 Rita Ora's new single Black Widow has become a girl power collaboration - the track features a chorus written by Katy Perry and Iggy Azalea joins the Brit on the record.

The Australian rapper let it slip that she would be rapping for Ora is a new interview, revealing she'll also appear in the song's video.

She says, "We're gonna have a very crazy music video, with a lot of other people that you guys may know, playing different characters. I'm really excited about it."

Ora also teamed up with Azalea to perform the track at London's Wireless Festival on Friday (04Jul14).

The new song will be released in September (14).