Rita Ora eventually wants a ''baby in one arm and a microphone in the other'' just like her idol Beyonce Knowles. 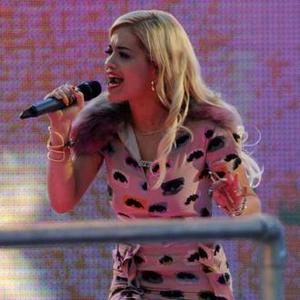 Rita Ora eventually wants a ''baby in one arm and a microphone in the other''.

The 21-year-old singer - who is dating reality TV star Rob Kardashian - is signed to Jay-Z's Roc Nation record label and says his superstar wife Beyonce Knowles is her inspiration as she successfully combines motherhood and a career.

She told The Sun newspaper: ''Beyonce was, and she still is, such an inspiration. She's been in The Game for so long you think she's older but she's only 30.

''One minute I'm singing Destiny's Child's 'Say My Name' in my dad's pub and the next I'm sitting here asking Beyonce, does she think this song is right for my album?''

''The first time I met her I was so nervous. I hugged her and told her she was my inspiration. She's a superwoman with a career and a family. I hope one day I can do the same - baby in one arm, microphone in the other.''

Rita also revealed her mother calls rapper Jay-Z ''that nice Beyonce's husband'' and says Gwen Stefani is another major influence on her.

She added: ''I love that woman. That's why I wear this red lipstick and have my hair blonde.

''I love her style and her music and the fact she is such a strong role model. And she mixes pop, punk and hip-hop - that's me.''