Review of Take The Crown Album by Robbie Williams

In 2005, just as Robbie Williams was really starting to get his arms fully elbow-deep in the sort of faecal-quality material that in the end was only really useful for building motorways in China, he hit upon a rare moment of poignancy with the ballad 'Advertising Space'. Co-written by himself and Steven Duffy, the song was released as a single from the otherwise dreadful Intensive Care and, with its lyrics about the tragic fall of a once mighty superstar, it suggested something almost akin to self-awareness. 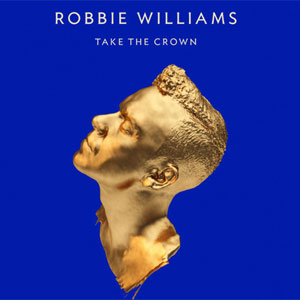 Williams solo pop career had, after all, shown a certain amount of promise towards the end of the 1990s, only for the puff of potential to disappear as quickly as his skull had rammed itself snugly between his fleshy arse cheeks. With 'Advertising Space', he seemed to admit that it had all gone a bit tits up as far as the song stuff was concerned, and that change was necessary lest he end up washed out and faded like so many who'd gone before him.

However, following the utter disaster of Rudebox in 2006, the biggest change to the public persona of the now 38 year-old has been a loss of confidence. Say what you want about his output; live, on camera or in front of fans Williams never seemed anything less than infallible, a King before his subjects whose unshakeable self-belief meant that even his worst artistic directions could be tolerated by his devotees. Yet it took just a botched door on the X Factor in 2009 to make it abundantly clear that the artist who once used to antagonise Oasis when they were in their career pomp wasn't quite sure of even his own worth anymore; struggling to get through the door to the stage on that comeback on X Factor, he struggled to gather himself and delivered a performance that stuttered and shook with anxiety, something that's imbued itself within him since.

That year's Reality Killed The Video Star was limp, and a return to the Take That fold was inevitable after it became clear that he now needed them somewhat more than they needed him. However, even the fillip caused by their hugely successful world tour last year hasn't given Take The Crown much more chutzpah. At one point Robbie sounds like he's trying to convince himself as well as us and the - we presume - girl of his affections in 'Different' when he sings "this time I'll be different I promise you, this time I'll be special you know I will". Admittedly 'Different' is one of the better sounding tracks, and it is a positive for Williams that rather than try and remain too snotty and jumped-up, he's attempting to move towards his 40s with a little grace, strings tasteful in their embellishment of certain tracks, and a relatively orthodox sound hallmarking the best efforts here.

Yet there's no real energy here, even when he attempts a cocksure pose, his attempts at outspokenness come off half-baked and half-hearted; "fuck you!" he sings at one point, for no apparent reason, whilst elsewhere he takes a pop at the "shit on the radio", neatly losing that self-awareness he'd gained a few years back and sidestepping the fact that he's been responsible for a good chunk of it over the past decade. Williams past dabblings with 1980s synth-pop has always been a bit of a mixed bag (lest we forget 'Radio' from his Best Of), and once again it's going off in this direction where he's at his least convincing. 'Gospel' sits somewhere between the MOR of Sting and Don Henley, whilst 'All That I Want' judders along like an offcut from Muse's latest smorgasbord of metaphorical bodily functions passing as an album, Williams low croon replacing Matt Bellamy's testicle grabbing shriek.

It is hard, though, try and muster emotion either way for Take The Crown, and it's that which is the saddest facet of this record. Williams for so long was an artist who thrived on reaction; for much of his career he had Guy Chambers in his corner writing his songs, but that desire to cajole, to annoy, provoke and entertain was something all of his own - and it did, in spite of himself sometimes, entertain. On 'Not Like The Others' he still seeks to strike out as a unique entity, yet comes away sounding like he couldn't be anything more formulaic. The end, an MOR ballad with female vocalist Lissie titled 'Losers', is a depressingly flat way to end an LP that, to its credit, shows an artist that has finally gotten serious again, seven years after suggesting that he was going to. The trouble is that seriousness has meant that, whilst he's lost his irritability, he's also lost a hell of a lot more to boot as well.