Crushed on a tram between middle aged women with recently acquired leathery tans and a group of 'lads' bantering about their adoration for Olly Murs to anyone who awkwardly casts an eye in their direction is my first indication of what attending a stadium pop concert of this scale is going to be like. This, by the way, is the first night of his three night residence in Manchester and was the last to go on sale which means these people aren't even the die-hards. God. Help. Us. 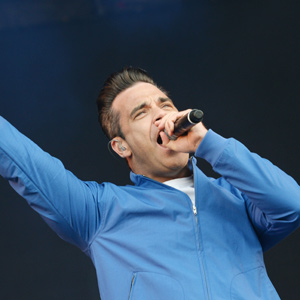 It's a warm night and after that experience we head straight for the bar like any self-respecting individual would. While there, Olly Murs takes to the stage; you can hear him from outside the arena so there's really no need to rush because, let's face it, we all know his shtick by now and it goes something like: wear bowler hat, be cheeky, and copy Robbie. Yep. He plays through his hits 'Heart Skips A Beat' and 'Troublemaker' and a host of other songs that are just as friendly and soulless. He has a good voice and he's designed perfectly for this environment; he knows when to let the audience sing for him and when to crank out his dance moves and point suggestively at his bum which is, you know, lovely, but he's just not actually very entertaining. I'm all for few good crotch thrusts, and a camera that shows audience members dancing like idiots is obviously hilarious, but Olly, mate, it's a big stage and a bit of presence never hurt anyone. You can't just shout Robbie's name and think you've tricked us into thinking you're him. You're not.

Unlike Rihanna, bang on 9 o'clock Mr Robbie Williams is flying down a zip wire to rapturous applause; it's not the biggest or boldest entrance and is actually fairly low key for a star of his calibre, but he looks effortlessly cool as he poses mid-air in his spangly tailed jacket and studded shoes. As soon as he hits the ground and shouts, "Manchester, are you ready to let me entertain you?" a few times he's off into one of his biggest hits. When you can feel the sturdy structure of a football stadium shake beneath you as over 50,000 people sing and jump in euphoria you know something special is occurring.

By the time the three minutes are over, he's sweating profusely, but it doesn't stop him screaming into the camera, dancing like he's still in his cocaine fuelled 90s heyday and riding various statues of his own face. He goes straight into 'Not Like the Others' and 'Minnie the Moocher' from that swing album you all forgot he did till just now and he sounds amazing live backed by a brass section, guitars, a drummer, and a plethora of backing singers. It's a set up that lets him interact and proves that you don't need organised dancing to have a good time. Robbie's the ultimate performer and this is a much more natural state to witness him in even if it is all a bit egotistical in the end. He's the pop star of pop stars and he pretty much made the wise crack a mainstay, but it's not until here that he really takes a break, he's got a big back catalogue to get through and he really packs them in tonight offering the odd verse of hits like 'Millennium', 'Better Man', and 'Sexed Up' as he plays the acoustic guitar.

It's six years since Robbie's done a solo tour and that's practically forever in this world, but he's clearly delighting in being back in a city that's entirely his and the production of his Take the Crown tour is insane, just when you think you've seen it all a version of his head that shoots water out of the mouth comes out, then one that glows to look like a skull, and then the massive face that's been looming above you the whole time gets a monkey projected on to it. I mean, there's props and then there's golden busks of your own head that you can stand on and gently be rocked from side to side and these are definitely of the latter variety.

For 'Kids' he welcomes Olly Murs back to the stage to duet with him in place of Kylie. It's nicely done and clearly shows them both at ease in one another's company; it's a performance that acts as a handing over of the throne from one generation of pop royalty to the next. It's not the only mention Olly gets tonight from his hero though as Williams in all his childlike exuberance shows us the now infamous clip of Olly Murs falling down the stairs mid show and then he shows it again while laughing heartily. Never one not to laugh at his own failures, he shows a clip of himself doing pretty much the same thing and it's moments like these that make him such a joy to watch live, everything he does, even in front of 55,000 people, hammers home just how normal he is at heart. He mocks his own music by commenting on 'Rudebox', he dances with one lucky lady from the crowd who he invites on stage to get in a prop bed with him, forgets some words like it's no big deal, and he invents 'The Stoke Sit Down' which is essentially the very bad looking opposite of the Mexican wave.

As expected, his biggest hits 'Feel', 'She's the One', and 'Angels' were saved till the encore, each of them are classic Robbie songs and sound stunning tonight being sung by every member of the audience. As the darkness settles over the arena and the fireworks go off during finale 'Angels', it's a moment of shivers, chills, and undoubtedly tears. While he leaves the stage the audience do one last round of the chorus, nobody dares to leave early to beat the crowds. Two hours and twenty odd songs later Manchester knows they've been entertained.