The 40 year-old singer announced the exciting news on Monday via Twitter, expressing how he and his wife are "delighted" about becoming parents for a second time. 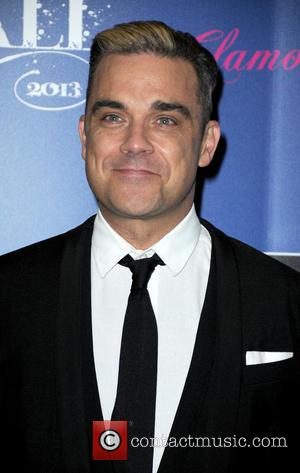 Robbie Williams is going to be a father for a second time.

The 40 year-old singer and his wife, Ayda Field, are set to welcome another child into the world later in the year.

Williams confirmed the exciting news on his Twitter on Monday (April 28th).

"Ayda and I are delighted to announce that Theodora Rose Williams is going to be a big sister. RW," he tweeted.

Theodora, who is nicknamed Teddy, is only going to turn 2 this September, but she has already taught her pop star father how he should live his life.

"Everything I do is for her," he said in an interview with BBC Radio 4 this past November (2013). "There's a reason for me to do everything now. I wasn't going to have a kid and I wasn't going to get married then I met someone who was amazing and fell in love with her completely and I changed all my thoughts and feelings about that."

Robbie first began dating Field, who is an American actress, in May 2006 and they tied the knot four years later at his Los Angeles home on 7th August 2010.

"It's a miracle that it has happened because I now get to experience the full gamut of being human," he added in the BBC interview. "She's a sensational kid."

Before being a married man and a father, Williams admitted that he was "very selfish for a long time" and "didn't have to lift a finger" throughout most of his life, so the concept of having a child initially "terrified" him.

MORE: Robbie Williams: "I'd Be Dead If It Wasn't For My Managers"

The 'Rock DJ' singer explained to BBC Radio 4 he was "terrified all through the pregnancy [with Teddy] that I wasn't going to be able to step up and be a father, the father that I want to be to her."

But as soon as little Theodora arrived, Robbie new being her father was "the most important job I will do on the planet." Williams and Field are already parents to 1 year-old Teddy