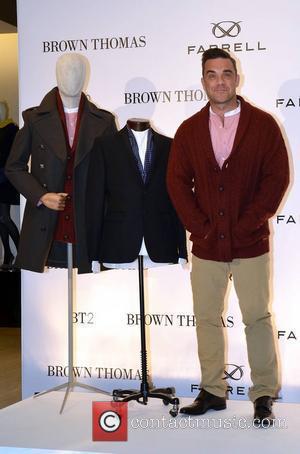 Fresh from his attack on the BRIT Awards, Robbie Williams got out of Britain altogether this week, flying to Germany to launch his fashion label, Farrell, in Europe. Fellow 1990s pop-star Victoria Beckham - now one of the world's biggest designers - will no doubt tell Robbie that expansion is the key to a global fashion empire, and Williams seems to be making the right moves.

According to handbag.com, Williams was in Charlottenburg, Berlin, to see his collection hung on the rails at the upmarket KaDeWe department store. Donning a smart suit for the photo-call, the Take That man showed off his new slim-figure and even gave a photographers a closer look at his tailoring - red lining, nice! The collection, inspired by his grandfather Jack Farrell, is currently stocked in House of Fraser and Selfridges stores across the UK. Speaking at the British launch of the label last year, Robbie told journalists, "I''m into clothes but not necessarily fashion and I think this is reflected in the collection," adding, "I was inspired by the clothes that I've always worn and loved. I worked with a great team of experienced people who helped me to bring my ideas to life. I enjoyed choosing every detail - from the lining, to the buttons to the cut."

It's been a strange week for Robbie, who performed 'Candy' at the BRIT Awards at London's O2 Arena, though slammed the show in a hastily written song afterwards. "Well that Brits night was so f*cking boring... Coke in the bogs till seven in the morning. Look the wrong way and we end up brawling.Then I had a bit of beef with you-know-who. And I f*cked a few female stars or two." Robbie Williams Launched His Label 'Farrell' In Berlin This Week