Robbie Williams Caught Out As He Flirts With Teen Down Under

Robbie Williams Was Left Red-faced On Saturday (18oct15) After Flirting With A Young Fan At His Show In Australia - Only To Discover She Was Underage. 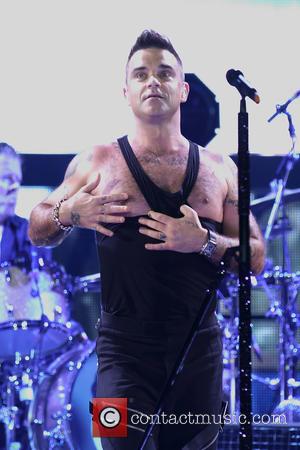 The British pop star, who is on tour Down Under, was performing at Brisbane Entertainment Centre when he spotted a woman in the crowd and compared her style to a sexy secretary.

Robbie told her: "I love that look. I love the look with the glasses, and the hair, it's like a secretary look."

However, he was soon regretting his cheeky comment as he learned the girl, named Morgan, was celebrating her 15th birthday at the show, which she attended with her mother.

As the audience broke out in laughter, Robbie quipped, "Oh s**t. Please don't put this up on YouTube! It'll be on YouTube, and then it'll be in the newspapers, and then we'll all be in trouble!"

He then dedicated his hit song She's The One to his "new girlfriend" as he brushed off the embarrassing blunder.