Robbie Williams says his fame has come from his low self-esteem, which has been a ''real drive''. 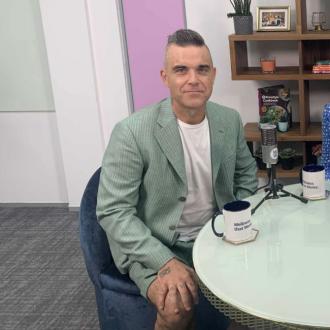 The 45-year-old singer admitted that he suffers from a ''lack of self-esteem and self-worth'' but it is this lack of confidence that he credits his success to, calling it a ''curse and a blessing''.

Speaking on the WW Wellness that Works podcast, Robbie - who is a WW ambassador - explained: ''The curse is a blessing because this lack of self-esteem, lack of self worth. It's been real drive. You know, it's like I'm here because I don't like myself very much. You know, that's the truth about the inside working of my mind, it's like, I don't like myself a lot and I feel uncomfortable in my own skin. And because of that, it's propelled me to do this on stage and be the 'let me entertain you' guy.''

Robbie also claims his wife Ayda Field, 40, has ''more than a touch of dysmorphia'' and is very disciplined about what she eats but says they are both trying to bring up their children to have a healthy relationship with food.

''You can't just love yourself. I don't think. You can't just wake up and go, you know what? I love myself today. I'm not sure that happens. I think you have to have input and take action to if you want to have self-esteem. I say this is a life's work. You don't have to love yourself. You just have to not hate yourself.''

During the candid chat, Robbie also spoke about his lifelong battle with his weight.

He said: ''Well, there is this relentless weight battle and weight issue that I've had forever. But the most recent thing that triggered this whole thing was I relapsed on smoking. So when I smoke, I'm half smoke, half man. I'm a man of extremes. And the wife said, 'You've got to give up smoking. January the 1st.' And in May, that sounded like a good deal. And also, I didn't want to do the death, the early death. So I was like, 'yeah, OK'. Then it got to November. And I was like, 'remember January the 1st?' And I just thought, hang on, maybe I can just view this differently.

''This whole process, not only could I give up smoking, but I could be fit and healthy and have a clean head and a clean vision of how I want my future. And I found that moment to be very, very powerful.''

Robbie Williams is a WW ambassador and is currently on the new myWW programme. For more information about myWW, visit WW.com or download the WW app. Listen to the podcast episode in full and subscribe on the WW YouTube channel, iTunes and Spotify.