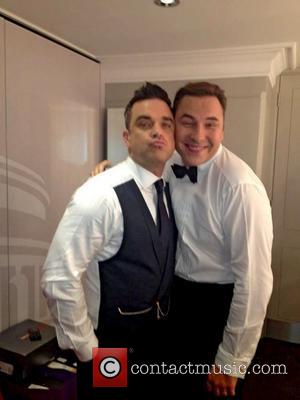 For someone who spends more time holding out his microphone to the audience, ironically meaning the crowd do most of the leg work at his concerts, Robbie Williams can still attract the crowds. His latest show - at the 02 London - had gone down marvellously.

He was even given a Twitter boost by his pal and old band mate, Gary Barlow, who posted, "Have a great show tonight @robbiewilliams #O2london", and after the show, celebrity praise was ample, with comedian Alan Carr tweeting, "Just seen @robbiewilliams at the 02 - amazing - what a showman!! Now how can I get him on @chattyman hmmmmn!!!!" The Telegraph were perhaps the most doting, however, giving the show a 5 star review, writing, "The show was staged in the round and it felt fitting because we were seeing many sides of Williams - the self deprecating comedian making cracks about the Queen not recognising him, the Norman Wisdom impersonator and the great British pop icon."

"Tonight was triumphant," the review went onto say. "A reminder that Robbie Williams remains one of the national treasures of British pop. 'They said it was leaving me, the magic was leaving me' he had sung earlier on 'Be A Boy', adding 'I don't think so.' I don't think so either, Robbie." So it looks like Robbie's still got it!