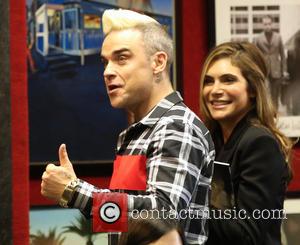 The Angels singer is working on a TV project which he is hoping to bring to the small screen, but he has refused to reveal any more details.

"I've got a few irons in the fire that aren't necessarily musical," he tells the Sydney Morning Herald. "Nothing solid yet but it would involve TV... Yeah, acting... I shouldn't have said anything because I can't say anything.

"I've got an idea for a TV show that I want to do. It may or may not happen - and at the moment it is happening and I'm excited about it."

The new project will be an addition to Robbie's already very busy schedule - he is currently touring in Australia and is believed to be working on a new solo album for release next year (16), while reports also suggest he is being courted for a return to Take That.

He first left the British boyband in 1995 and launched a successful solo career, but rejoined them for their 2010 album Progress and subsequent tour in 2011, before leaving again.

However, Robbie is rumoured to have been approached to take part in celebrations for the group's 25th anniversary in 2016.