Robbie Williams has poked fun at Bruce Jenner, saying his bright pink dyed hair is going through a ''transition'' like the 'Keeping Up With The Kardashians' star. 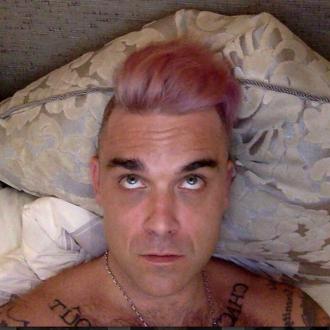 The 'Go Gentle' hitmaker compared his new bright pink hair as going through a ''transition'' like the 'Keeping Up With The Kardashians' star - who is currently rumoured to be undergoing a gender transition.

Alongside a photo of his newly-dyed hair, he wrote on Instagram: ''A disclaimer: my hair is pink... It isn't meant to be, it's a dye job gone wrong... In 24 hours it will be different, much like Bruce Jenner it is in transition... If I get papped please note I didn't intend to have a pink head... RW x(sic)''

His remarks didn't go down too well with all his fans.

One wrote: ''So disrespectful to make a joke about someone transitioning.(sic)''

Meanwhile, Bruce previously admitted to undergoing hormone treatment after he was involved in a car accident.

He was accompanied to a nearby hospital by Los Angeles County Sheriff's deputies and after voluntarily providing a blood sample, he was asked what, if any, medication he took.

A source said: ''[He said that] he was taking very low dosage of hormones that his doctor had prescribed.

''Bruce has nothing to hide, and was very co-operative with cops, and appreciated their professionalism.''

The source also claimed that the Olympic athlete took the accident ''very, very hard'' and is receiving support from his family.

The insider added: ''During the entire process Bruce was obviously very, very shocked and inquiring about the other victims - this has been a total nightmare for him, and Bruce is taking it very, very hard.

''His kids are hunkering down with their dad - they are a very close-knit family, and will do whatever is needed to help him at this very sad and tragic time.''