Robbie Williams has admitted his disappointment at Radio 1's snub. 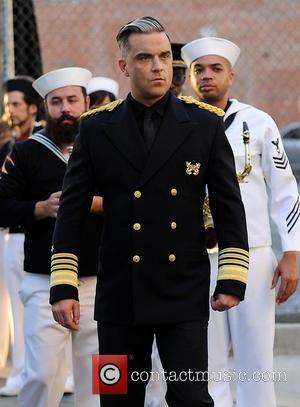 Robbie Williams has reopened his beef with Radio 1 over the station's decision to cease playing his singles. Radio 1 breakfast DJ Nick Grimshaw had previously said Williams, 39, was "not relevant" to the station's target audience of 15-29 year-olds and his No.1 single Candy was pulled from its playlist.

Though Radio 1 did play his latest single 'Goin Crazy' with Dizzee Rascal, Williams has spoken of his dismay at being frozen out by the UK's biggest radio station.

"I'm very ambitious. So when Radio 1 goes and is taken away from you, a huge bit of your arsenal goes. It's your main oxygen to get your stuff out there," he told Radio 4's Mastertapes programme.

Grimshaw has told Five News, "To 13 and 14-year-olds he's not relevant. they've got One Direction. I liked Take That when I was little, but I'm not little anymore," prompting Williams to offer a rebuttal at the Sony Radio Awards.

In the same interview this week, Williams admitted he was jealous of younger stars guaranteed airplay, including One Direction's Harry Styles who is enjoying even more popularity than Robbie in his prime.

"He's talented, he's good looking. He could have it away. And I'll be sat here saying 'damn him,'" he said, adding, "Everybody who's anybody has been competitive and over-sensitive and a bit silly."

Williams will release the follow-up to his 2001 swing album, title Swings Both Ways in November. The record features covers and original songs, including duets with Michael Buble, Olly Murs, Lily Allen and Kelly Clarkson. Which sounds horrendous.