Robbie Williams would be 'dead' without wife Ayda

Robbie Williams is convinced he wouldn't be here today if he hadn't met his now-wife Ayda Field in 2006. 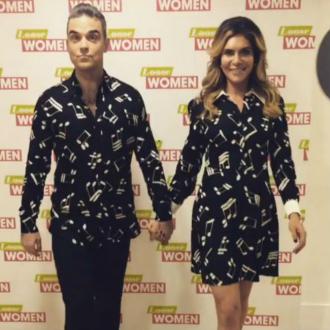 Robbie Williams ''would be dead'' if his wife Ayda Field wasn't in his life.

The 'Candy' hitmaker has entered rehab on numerous occasions throughout his career for alcoholism, substance abuse, depression and even an addiction to the energy drinks Lucozade and Red Bull but, although time in the specialised clinics helped him beat his demons, he believes meeting the 37-year-old actress in 2006 and marrying her in 2010 cured him.

Speaking on 'Loose Women' on Monday (14.10.16), the former Take That hunk explained: ''I would be dead [without therapy] I went to rehab a couple of times and a lot of therapy. Me masking what was going on inside or medicating it lead to some very dark places in my head. I was close to not being on the planet, but I recognise that.

''Get sober or die. Consciously knowing that that is your only choice is what I did. She [Ayda] did [help]. My life is way much better because Ayda is in it full stop.''

However, although she helped turn his life around, Ayda - who has four-year-old daughter Teddy and two-year-old son Charlton with Robbie - can't help but well up when she hears about the ''darkness'' her talented spouse went through without her.

Ayda - who also appeared on the lunchtime panel show with her handsome partner - said with tears in her eyes: ''I just get so sad hearing about the darkness.''

But Robbie - who used to smoke 60 cigarettes a day - is proud of the journey he's taken as it's made him the ''rich'' person he is today, although he still has relapses.

He replied: ''That's OK baby it's all part of the rollercoaster happening today and that is what was. My life is richer now because of what I went through. I still get times when it goes down and don't know what is happening and I wonder if it is going to.''