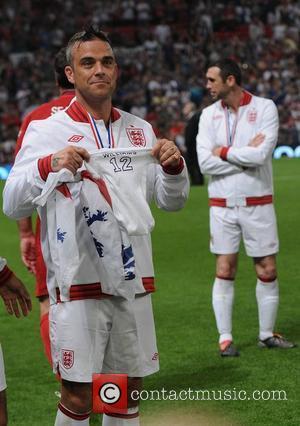 Robbie Williams kicked off his former Take That bandmate Gary Barlow's pop and classical music spectacular to mark Queen Elizabeth II's Diamond Jubilee with the Coldstream Guards on Monday evening (04Jun12).
Over 10,000 ticket winners joined the Queen, her son Prince Charles, grandsons Princes William and Harry, members of the royal family and British Prime Minister David Cameron outside Buckingham Palace in London for the three-hour musical extravaganza.
Williams launched the show with his pop anthem Let Me Entertain You. He was backed by members of the second battalion of the Coldstream Guards, who regularly perform ceremonial duties for the Queen.
Williams was followed by Black Eyed Peas star will.i.am, who performed his band's hit I Gotta Feeling with Jessie J. She then stuck around to sing her hit Domino before boy band JLS hit the specially-constructed stage on The Mall.
The early show highlight came when Barlow and a clearly nervous and slightly off-key Cheryl Cole teamed up to sing a cover of country group Lady Antebellum's Need You Now.
Sir Cliff Richard was also a big hit as he took to the stage to perform a medley of hits from his 60-year career. Offering one tune for each decade of the Queen's reign, the veteran sang The Young Ones, Devil Woman, We Don't Talk Anymore, Wired For Sound, and his New Years Song rendition of Auld Lang Syne.
He completed his sing-along set with his 1968 hit Congratulations, telling the crowd, "It was meant to be sung tonight."
The big show also featured performances from classical pianist Lang Lang, opera singer Alfie Boe, Tom Jones, Annie Lennox, Grace Jones, Jools Holland, Dame Shirley Bassey and Ed Sheeran.
Williams returned to kickstart the second half of the show after the Queen arrived in the royal box with a cover of Bobby Darin's hit MACk The Knife. The Queen attended the concert without her husband Prince Philip, who was hospitalised with a bladder infection earlier in the day.
Williams' ex-bandmate Barlow then took the stage to debut Sing, the anthem he and Lord Lloyd Webber wrote for the jubilee, with musicians and choirs from all over the Commonwealth as images of the Queen flashed on huge screens surrounding the concert site.
The weather gods appeared to favour the big show - a weekend of London gloom cleared to give Barlow's royal spectacle a blue-sky backdrop as the sun set on the city.
As darkness fell, Kylie Minogue took to the stage for a show-stopping hits medley, dressed as a London Pearly Queen, just before opera star Boe and soprano Renee Fleming performed Somewhere from West Side Story from a Buckingham Palace balcony overlooking the concert.