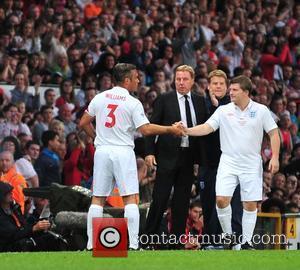 British singer Robbie Williams has married his longterm girlfriend Ayda Field at his Los Angeles home.
The Angels hitmaker, who has been dating the actress since 2007, proposed over the Christmas (09) period.
The pair reportedly exchanged vows during an intimate ceremony in front of friends and family at Williams' Beverly Hills mansion on Saturday (07Aug10).
Williams had originally planned to host the wedding on Santa Catalina island off the coast of California but the Take That star reportedly swapped venues after details were leaked last week (ends06Aug10).
His father Pete Conway tells Britain's News of the World, "At last, Rob is happy. That's what you want for your kids and this is the happiest I've seen him. Ayda is so beautiful and so delightful and so lovely and just so right for him. They are brilliant together."
The singer is said to have made Field sign a prenuptial agreement to protect his fortune in case of divorce.