De Niro Brings Paris Down Under 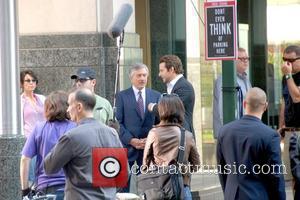 Picture: Robert De Niro and Bradley Cooper shooting their new film 'The Dark Fields' on location in Philadelphia, where street names were changed to depict Manhattan...

Robert De Niro brought a touch of Parisian elegance to Australia this week (beg04Jul10) - filming scenes in a mocked-up French street in the middle of Melbourne.
The actor has flown Down Under for a 10-day shoot to film his part in new movie The Killer Elite, based on The Feathermen novel by famed British adventurer Sir Ranulph Fiennes.
Movie crews shut off an area of Melbourne on Tuesday (06Jul10) to film De Niro's scenes, and they baffled onlookers by transforming the sidewalk into a street from the French capital - placing Parisian phone booths, street signs and information boards along the road.
The street was also bedecked with vintage cars to transport De Niro back into the 1970s.
The film's executive producer, Christopher Mapp, recently told TheAge.com they will be using the Australian city as a backdrop for most of their foreign location filming: "We've found elements of the Middle East, Paris, the U.K. here. We'll be shooting elements of true locations, too, but I challenge audiences to pick which is which."