Robert De Niro Lashed Out At A Tech Mogul As He Presented Angelina Jolie With A Top Honour At The Wsj Magazine Innovator Awards In New York On Wednesday (04nov15), After Taking Exception To His "Condescending" Speech. 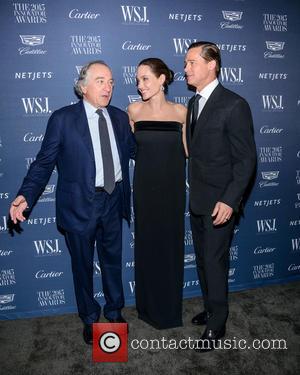 It's not clear what part of Slack app co-creator Stewart Butterfield's acceptance speech irked the famously grumpy movie star, but he took a moment to admonish him from the stage before saluting Jolie.

Butterfield joked he felt "a long way from San Francisco" as he looked around the MoMa gala filled with "supermodels and movie stars", including De Niro, Jolie and Brad Pitt.

The tech mogul then addressed De Niro directly, adding, "I watched Godfather II on the plane... and when you killed Don Fanucci, I liked that."

His remarks drew a smattering of laughter, but it became clear later in the evening that De Niro wasn't amused.

"Whoever the last speaker was... I thought you were a bit condescending to us actors... celebrities," the movie veteran snarled. "I'm gonna go on record with you just to say that. And I don't give a f**k who you are."

But De Niro refused to let his feelings ruin the evening, and he then delivered a heartfelt salute to Jolie, the recipient of the 2015 Entertainment/Film Innovator prize.