Will Kristen be jealous? Robert Pattinson goes through awkward kissing scene with Mia Wasikowska for Cronenberg's 'Maps To The Stars'. 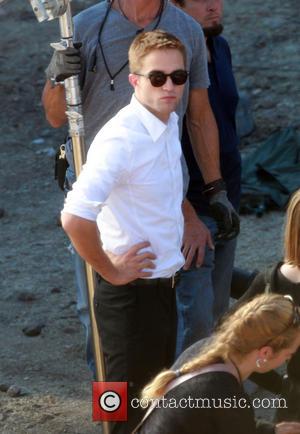 Robert Pattinson was spotted canoodling with Mia Wasikowska on camera recently - but don't worry, it was just for a particularly steamy scene in his new movie Maps To The Stars.

The 'Twilight' star is in the front of the limousine for once as he takes on the role of driver and aspiring actor Jerome in the new drama. As well as starring alongside Mia, who plays feisty pyromaniac Agatha Weiss, Pattinson will also appear alongside John Cusack, Julianne Moore and Carrie Fisher.

Getting the hang of cruising in a limo is one thing, but what Robert finds most difficult to get his head round is the romantic scenes, which he has previously admitted is 'awkward'.

'But at the same time... it really depends on how it's staged and stuff. It's like doing Twister', he had added, though he was doing his best to keep things relaxed and light-hearted by sharing a giggle with 'Alice in Wonderland' actress Mia in between scenes.

Easing his nerves a little more perhaps is familiar face David Cronenberg, the director, who Robert has previously worked with on 2012 thriller Cosmopolis. Maps To The Stars is a satire drama about the Hollywood and the Western entertainment industry in general and is due for release in 2014. Robert Pattinson and Mia Wasikowska star in 'Maps To The Stars'