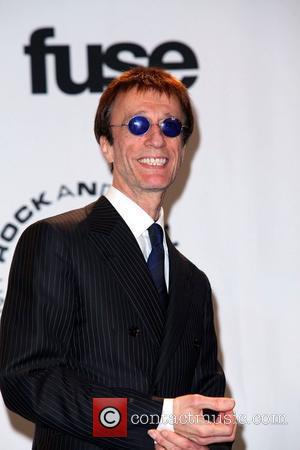 Robin Gibb has hailed DUSTY SPRINGFIELD as the greatest female singer in modern history, insisting no artist can match the soul legend.
The Bee Gees star unveiled a special plaque commemorating the Son of a Preacher Man hitmaker at her former home in Kensington, London on Sunday (08May11) and he used the occasion to praise Springfield's vocal talent.
Gibb also criticised the current crop of female chart stars, telling reporters they "just pose at singing".
He says, "(Springfield) is probably the greatest female popular singer in the modern pop rock era - since 1963, there's been no one to match her.
"This includes the United States as well - they can't come close to her. Today they just pose at singing. She was the genuine article.
"I don't think there will ever be anyone that could take the place of Dusty Springfield."
Springfield, who died in 1999, lived at the London property from 1968 to 1972.

Robin Gibb's son having a baby

Dwina Gibb feels 'closer than ever' to Robin