So, You're All Still Buying Robin Thicke's 'Blurred Lines'

Robin Thicke's 'Blurred Lines' continues to sell by the bucketload. 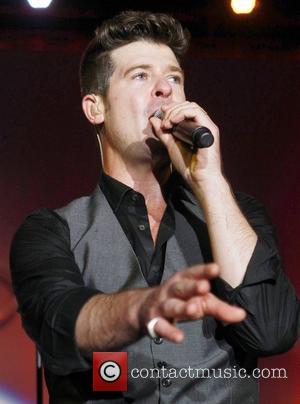 'Blurred Lines,' the smash-hit pop single by Robin Thicke leads the Billboard Hot 100 for the seventh week running. It's the most time spent atop the chart this year, eclipsing the five-week record set by Macklemore & Ryan Lewis's 'Thrift Shop' in February-April.

Robin Thicke's song, featuring rapper T.I. and Pharrell Williams, also tops the Digital Songs chart for an eighth week, selling 340,000 downloads in the Nielsen SoundScan tracking week. That's down 11% though was easily enough to maintain its stranglehold on the top of the chart.

Elsewhere on the Hot 100, Daft Punk's 'Get Lucky' dropped two places to No.4 while Bruno Mars entered the Top 5 with his soulful hit 'Treasure.'

Though Blurred Lines is likely to emerge as the biggest selling single of the year, it's been plagued by controversy for its lyrics and explicit video, which sees Thicke and Williams dancing in suits around naked models.

In response to criticism from a rape charity that the song "reinforces rape myths", Thicke said: "I can't even dignify that with a response, that's ridiculous."