Robin Thicke's 'Blurred Lines' is dominating the singles chart in the U.S. 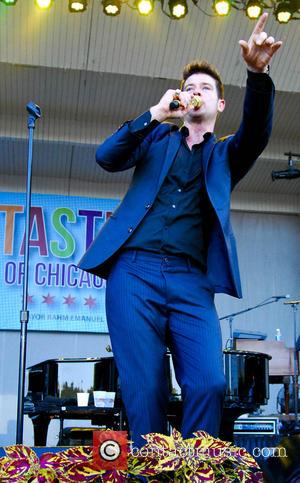 'Lines' is only the second song to sell at least 400,000 downloads in three tracking weeks, joining Gotye's massive hit 'Somebody That I Used To Know' featuring Kimbra, which reached the mark on charts dated April 28, May 5 and May 12, 2012, according to Billboard.com.

Last month, a spokeswoman from Rape Crisis, a charity that raises awareness and understanding sexual violence, told The Independent that the Blurred Lines lyrics, "seem to glamourise violence against women and to reinforce rape myths."

In response, Thicke said, "I can't even dignify that with a response, that's ridiculous," explaining, "For me it's about blurring the lines between men and women and how much we're the same.and then there's the other side of it which is the blurred lines between a good girl and a bad girl, and even very good girls all have little bad sides to them." 'Blurred Lines' appears to have widened its lead over Daft Punk's 'Get Lucky' in the U.S, gaining by 5% on its summer anthem rival.